Congestion on the nation’s highways added $74.5 billion in operational costs to the trucking industry in 2016, according to the American Transportation Research Institute’s recent analysis.

ATRI’s “Cost of Congestion to the Trucking Industry” update, released Oct. 18, relied on data from ATRI’s GPS database and the Federal Highway Administration to determine what costs the industry incurred from clogged roads. This year’s figure marks a 0.5% increase from the updated 2015 figure of $74.1 billion.

The report notes that road delays added up to 1.2 billion hours in lost productivity. Distributing $74.5 billion across the 11.5 million large trucks registered in the United States means congestion costs each truck $6,478. 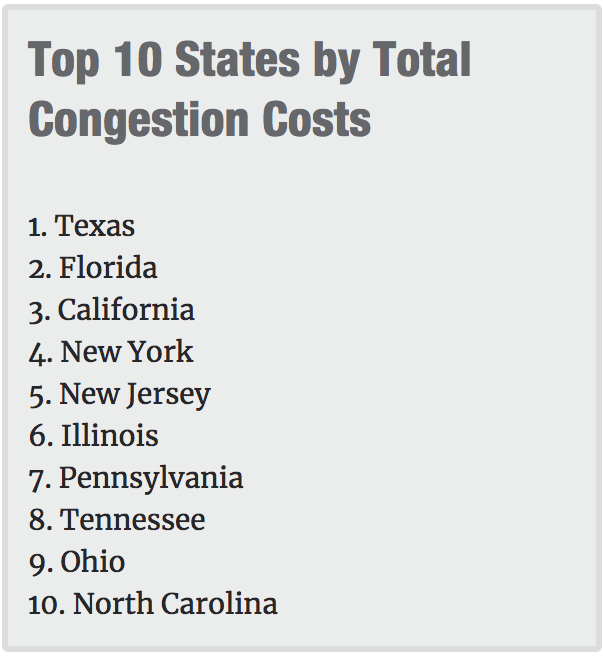 “We’re pretty much in a constant state of being jammed up on [Interstate] 75, I-95 or I-4,” Armstrong said. “It is a constant concern for our shippers and customers that when you’re going across I-4 or headed south on I-95, you can just plan on a lot of stop-and-go all the way down through Miami. Unfortunately, a lot of people that are on the road with you aren’t sure where they’re going because they’re tourists and so that somewhat exacerbates the problem as well.”

ATRI found that the majority of congestion occurs on relatively short portions of road in urban areas. Some 86.7% of congestion costs occurred on 17.2% of National Highway System miles.

To reduce the amount of vehicles clogging New York City’s streets, Gov. Andrew Cuomo has proposed congestion pricing in Midtown and Lower Manhattan. Cars and trucks would have to pay a fee once they entered this “congestion zone.” The purpose would be to encourage subway use and raise money to improve the public transportation system.

Although Trucking Association of New York Executive Director Kendra Hems acknowledged that the transit system offers an alternative that potentially can clear up roads and curb space for trucks, she said congestion pricing is unfair to truckers.

“Our argument is the trucks don’t choose when they enter that zone,” Hems said. “They are servicing the needs of their customers, and they’re delivering or picking up based on the request of their customer. They have no other option. They certainly can’t take a subway. And they shouldn’t be penalized for that.”

Georgia Department of Transportation spokeswoman Natalie Dale said that sound infrastructure, while important, is not a silver bullet for fixing congestion problems. Georgia, home to a growing population, many corporate distribution centers, inland and coastal ports and some of the nation’s worst freight bottlenecks, ranked No. 7 on ATRI’s list of states with the largest congestion cost increases, growing by $67 million.

“National congestion is tough because we know that it’s usually so isolated and specific to certain places,” Puentes said. “We understand, particularly as it relates to freight and trucking, that a huge problem is not the recurring congestion that happens in morning and evening rush hours, but it’s these pinch points where freight and other traffic is funneled and there’s no way around it.”

We understand that you are the heart of the entire trucking industry, and you deserve to be respected for your hard work.